Hundreds of thousands of young minds, already stunted by an education system that is designed purely to promote the political agendas of those in power, yesterday received judgement from their Educational Overlords; It was National Arse Level Day. The ‘How did I do?’ time finally arrived and our precious youth were showered with yet another cascade of worthless certificates to file in a drawer somewhere, never to be seen again – along with the Che Guevara T- shirts and One Direction posters. 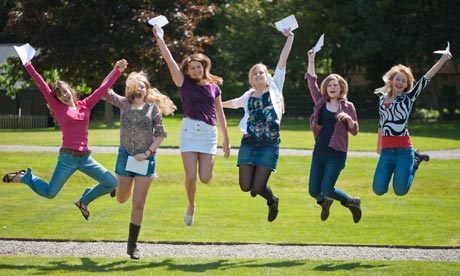 State statisticians poured over the collected data for proof that their systems of indoctrination are making the State richer and more justified – whilst 1 million of our children languish on benefits, totally uninterested in GDP or net tax yield for the Exchequer, but desperately hoping that there is more to life than reaching level 4,000 of Zombie Blood and Gore on the Playstation. Oily politicians beamed and tweeted with pride as large chested 18 year old girls bounced around waving bits of paper deluding themselves that they have somehow won a lottery entitling them to a life of milk and honey, celebrity success, or Prada handbags. Oh, you deluded fools….

Let’s be frank. The State is incompetent at pretty much anything it does, yet we entrust our childhood to an army of petty authoritarians trained to produce worthless citizens fit for nothing other than voting for the least damaging talking head on the TV every five years. We don’t teach our children how to think, explore, create or imagine. We create unemployable monsters full of unplaced self worth and drunk on entitlement, to spend their days in adulation of 17 year old factory produced minstrels or ball kickers for the entertainment industry.

I’ve read a million CVs in my lifetime (I head up international recruitment campaigns for global companies) – most of them pathetic attempts to sell turds rolled in Government issued glitter to uninterested employers in exchange for a starting salary in 6 figures. Most go straight in the bin whilst a teenager calling himself ‘D4zza’ – with a bone through his nose and a tattooed forehead – whines on national TV that his dreams of being a millionaire Hip Hop star by the age of 18 are being thwarted by us ‘evil capitalists, man’ – just like his Guardian reading teacher called Mikey Unicorn told him it would. Well, tough luck, kid. Any teacher worth his salt can spot the wheat from the chaff before the child has picked up a pen and reacts accordingly. Those with academic promise and those destined to pack toilet rolls for a living are treated as individuals and their education tailored to their needs – no ‘one size fits all’ idea, driving our kids down to the level of mouth breathing drones fit for nothing other than voting and claiming benefits.

Universities, drunk on the concept that all must have degrees and stuffed to the gills with those who actually ‘can’t do’ fight for the £30K debt of deluded idiots who believe the lies that a degree is a passport to Nirvana. In the meantime, our real vacancies are filled with those with enough courage and faith in themselves to travel the breadth of Europe for the mere chance of a paying job at any level. Not many Bulgarian youths are currently writing to their MP because the promise of instant fame on X Factor didn’t quite work out.

We have to stop selling these false promises to our children. We have to find what talent exists in each and every child and let them nurture it. The child that smiles happily whilst counting beans has no place running around a rugby pitch on a cold winters day to prove that education is “all inclusive”.

Who do I hire? Not the one with the most certificates, not the one who captained the hockey team or visited Thailand for a gap year of lying on the beach putting the world to rights, but the one who’d be genuinely delighted to come to work to do what they love doing and get paid for it – whether it be emptying bins or brain surgery.

Remove this pathetic conveyor belt education system that serves no one but those who designed it and replace it with home schooling, private academies, apprenticeships, technology schools and engineering talent pools. Places where individuals can flourish, regardless of State GDP or glorious 5 year plans and let Capitalism do the rest. Build it and they will come, gladly.