Politicians on the right often get accused of a lack of sensitivity and it seems UKIP is no exception, Milton was horrified today to see UKIP member Marty Caine calling Drummer Lee Rigby’s family ‘idiots.’ Milton’s little birds tell him that UKIP’s tough social media rules aim to ban anyone except official spokespeople from having the word ‘UKIP’ in their twitter bios. Is Mr Caine speaking for the whole of UKIP I wonder? 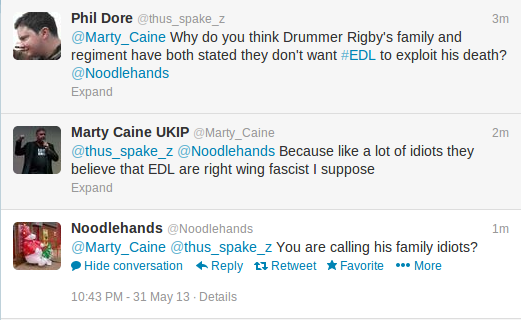 UPDATE: Milton has been looking at the personal blog of Mr Caine who claims that ‘the EDL actually impressed me with their restraint’ in response to the tragedy. If Mr Caine thinks attacking mosques and street violence is restraint Milton is curious to know what he sees as a wild night.

UPDATE 2: Milton understands that Mr Caine has been fighting back against people criticising him on twitter. Milton saw this charming rebuttal of his, where he proudly claims to ‘mock disability all the time.’

Milton isn’t sure what to say to that one.